The partnership between Hoi Hup and Sunway has delivered many high-quality homes in Singapore, such as Ki Residences

SINGAPORE (EDGEPROP) - It is difficult to find an enduring and complementary partnership between two property developers in Singapore such as the one between Hoi Hup Realty and Sunway Developments. According to Koon Wai Leong, general manager of Hoi Hup, the first joint venture (JV) project was in 2007. Since then, the joint venture partners have developed 15 projects with more than 8,000 residential units.

Hoi Hup is one of the most established local property developers in Singapore, while Sunway Developments is a subsidiary of listed-Malaysian real estate conglomerate Sunway.

This year, these two developers have been jointly recognised for their accomplishments, taking home the Top Developer Award at the EdgeProp Excellence Award 2021. Three of their projects are also recognised this year, namely Ki Residences, Parc Central Residences, and Parc Canberra. The relationship between the two developers started 14 years ago when each company was trying to make a bigger impact on Singapore’s real estate market.

"At the start of our relationship, Hoi Hup Realty was a younger, more boutique property developer in Singapore which gradually found a niche in bigger public housing developments. At that time, the company mostly took on smaller private residential and eventually HDB Design, Build, and Sell Scheme (DBSS) public housing projects,” recounts Koon.

The development team at Hoi Hup Realty was introduced to Sunway Developments through its sister company Straits Construction, which had engaged Sunway several times as a sub-contractor.

Both Hoi Hup and Sunway had ambitions to take on bigger projects in the future, and realised they could accomplish this together by pooling their resources and expertise, says Koon.

“We strive to deliver high-quality and highly liveable housing developments to our home buyers. This is our mindset from the day we pick a site and through the entire development phase,” says Wong Kok Leong, general manager at Sunway Developments. In June 2007, a joint venture between Hoi Hup Realty, Sunway Concrete Products, and Oriental Worldwide Investments won a DBSS site on Boon Keng Road that would be developed into City View @ Boon Keng.

This DBSS project was completed in January 2011 and prime units there continue to break resale records, most recently in November 2020 when a five-room unit was sold for $1.2 million ($938 psf).

Riding on the success of their first joint venture, they continued to jointly bid for projects together. Other DBSS projects include the 1,203-unit The Peak @ Toa Payoh that was completed in 2012, and the 682-unit Lake Vista @ Yuan Ching in 2015.

“During these formative years, our respective development teams grew in experience in delivering good quality homes for a wide range of owner-occupiers. Singapore sets high standards for all of its public housing projects, and this pushed us to consider every detail in each of these developments,” says Koon.

He adds that this history and track record in delivering public housing projects influenced the mindset of the development teams at Hoi Hup and Sunway to focus on their strengths in delivering very liveable housing. When the DBSS was suspended in 2011, the joint venture partners turned their attention to executive condominiums or ECs, which also catered to the sandwiched class — those whose household incomes were above the HDB income ceiling but could not afford to buy private property. ECs are a hybrid form of public and private housing and is meant to bridge the gap for those who aspire to eventually own a private condo. (Discover insightful data of any Singapore condominium with our condo directory)

Speaking on behalf of Hoi Hup, Koon says that the developer took this as an opportunity to evolve its expertise in developing quality public housing to push the envelope in terms of quality and design of its EC projects.

“Many of the key considerations in developing ECs remain the same as other public housing, such as affordability, liveability, and types of homeowners. The target market for ECs remains local owner-occupiers, rather than investors,” he says.

“Home buyers these days are very savvy, and developers need to deliver a product that best meets their needs while setting competitive pricing. We are selling a home, not just a product,” says Sunway Developments’ Wong.

Notable EC projects developed by Hoi Hup and Sunway include the 628-unit Rivercove Residences in Sengkang and the 531-unit Hundred Palms Residences in Yio Chu Kang. The JV’s newest EC projects are Parc Central Residences in Tampines, that was launched in January, and Parc Canberra in the new Canberra neighbourhood in the north, in February 2020. While taking on public housing projects, Hoi Hup and Sunway have gradually added to their portfolio of private condominium developments such as Ki Residences at Sunset Way. The 660-unit, 999-year leasehold project was the first new launch in the residential enclave in 20 years when it previewed in November 2020.

“With Ki Residences, we continued to emphasise comfortable and spacious living areas and a largely family-oriented design. Designing a condo in this desirable area, which had not seen a new launch in the past 20 years, also gave us the opportunity to add more layers of sophisticated design nuances throughout the condo,” says Koon.

He shares the sentiment of most real estate players and market observers that the pandemic has encouraged most home buyers to closely examine their lifestyle to make sure that the home they purchase can accommodate their specific needs.

“Speed to market is one of the major contributors towards a successful launch. The important takeaway lessons for us are the impact of policy changes and understanding the expectation of buyers,” says Wong.

Preparing for the next property cycle

This year, Hoi Hup and Sunway replenished their shared land bank in anticipation of the continued resilience in the housing market.

In September, the two developers jointly purchased Flynn Park en bloc for $371 million. The price for the freehold site in Pasir Panjang works out to $1,318 psf per plot ratio (ppr).The site can be redeveloped into a new 271-unit condominium, estimates Savills Singapore, which handled the sale. (See potential condos with en bloc calculator)

The land price works out to $1,440 psf ppr and marks the largest residential land deal since the last collective sale wave in 2017–2018. The deal was also brokered by Savills.

While there was a dearth of residential development sites on the market for sale over the past two years, Hoi Hup’s Koon reckons land supply through government land sales could ramp up next year.

He adds that the two developers will likely focus most of their efforts on planning and developing the two sites they acquired recently. Does that mean that their appetite for land is now sated? 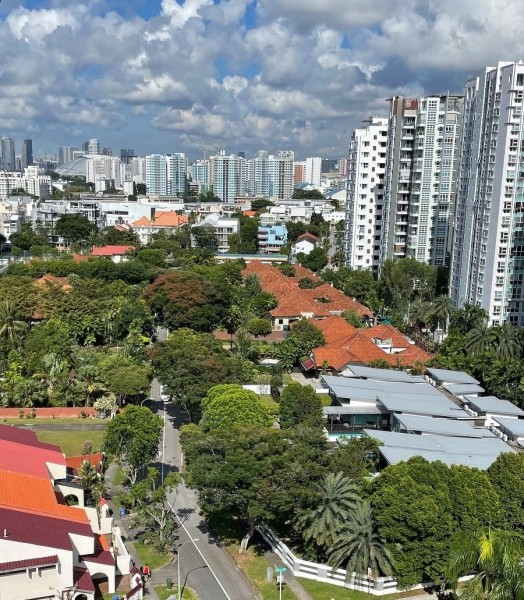 “I do not think we should write off the possibility of acquiring another site, but we will definitely be more selective,” Koon says. “Any site we pick up must complement our focus and strength and should be developed into a project that delivers well priced, good-quality homes to homeowners.

Looking ahead, the JV partners are likely to move up the value chain to more higher-end residential projects. “Based on our track record and expertise, both companies have much to offer the other segments of the private residential market,” says Koon. For example, the redeveloped site at Flynn Park will likely comprise two- to five-bedroom units, and they hope to offer larger units than typically expected.

“The pandemic has taught us to adapt quickly, especially in terms of how we design and plan future homes, and execute timely delivery of our projects. It is even more challenging now to meet our customers’ expectation in this new normal,” says Wong.

Koon says that the real estate market has proven to be very resilient, and the market continues to move ahead in strength. This should give locals and foreign buyers added confidence to invest in a home in Singapore.